ACTION (acronym) – A pragmatic focus on Assessment, Connections, Tasks, Interventions, Outcomes and Notifications that is applied consistently across projects and study settings.

Area -- A part of space defined as two or more contingent places.

Attractors (of Crime) -- Features of the environment that entice offenders to places to commit crime.

Crime - an action or omission that constitutes prosecution by the state and is punishable by law.

Emergence – The process of a place coming into being as important or prominent, for example, with the frequent occurrence of crime incidents; Relates to the extent and concentration of spatial influences, where spatial context of the landscape is likely to increase potential for new crime incidents.

Event Context - A situational-based understanding of crime incidents that looks at behavioral outcomes as less deterministic and more a function of a dynamic interaction among people that occurs at places.

Exposure - The historical facts and collective memories people have about places and the events that occurred there; Existing knowledge of offenders and crime hot spots.

Generators (of Crime) -- Represented by increased opportunities for crime that emerge from the collection of more people into areas following specific types of behavior, simply because of the increased volume of interaction taking place in these areas.

Geographic Information System (GIS) -- A computer software application for managing, editing, analyzing and displaying data which are spatially referenced to the Earth; A tool that supports the dimension of spatial analysis to research and evaluation by providing an interface between data and a map.

Modeling -- Attributing the presence, absence, influence or intensity of qualities of the real world to places within a terrain, to study their simultaneous effect on the risk for undesired outcomes.

Place – A particular portion of space where activities or functions may occur; The micro unit of analysis for Risk Terrain Modeling.

Risk – A consideration of the probabilities of particular outcomes; The probability of an occurrence of an undesired outcome (e.g., crime) determined by the increased spatial vulnerability at places.

Risk Management – An information gathering and analysis process, focused on a particular problem or set of problems, which integrates multiple methods and allows insights from each to prescribe ways in which to address problems or minimize their impact. ACTION is a component of risk management that produces spatial intelligence.

Risk Narrative -- A spoken or written account of connected events. It is a story, so to speak, about how events, such as crimes, relate to other phenomena in their environments.

Risk Terrain Modeling – A risk assessment technique and diagnostic method for identifying the spatial attractors of criminal behavior and environmental factors that are conducive to crime.

Risky Place -- A particular portion of space that has been assessed for its likelihood of experiencing a particular outcome and to which a value has been attributed thereby allowing for relative comparisons among places throughout a landscape; Formed as a result of the confluence of the spatial influences of certain factors combined with conditions of exposure derived from past crime events; Result from an overall assessment of vulnerability and exposures throughout the landscape.

Social Relevancy – Pertinence to society; Practical and social applicability to human behavior and peoples’ uses of space at certain times and settings; A concept to recognize that interactions among people and their geographies are deeply fluid, in that no landscape feature retains its spatial influence and applicability to human behavior permanently.

Space – A continuous expanse within which things exist and move.

Spatial inference – Regards interactions that occur among features to support criminal behavior; A concept to suggest that one is able to extract from a risk terrain model meaningful information for understanding criminal behavior patterns, for diagnosing attractors of existing crime clusters, and for forecasting places where new crimes are likely to emerge.

Spatial Influence -- The way in which features of an environment affect behaviors at or around the features themselves; The measurable link between features of a landscape and their impacts on people and the ways in which they use space; The articulation of perceptual cues observed about features and gleaned from personal opinions, experiences, and empirical knowledge about similar features or characteristics thereof under other similar circumstances;

Spatial Intelligence -- The communication and application of spatial inferences for deliberate action.

Spatial Risk Perspective - Approach to (crime) analysis that suggests a way of looking at behavioral outcomes as less deterministic and more a function of a dynamic interaction among people that occurs at places.

Strategic – The identification of long-term agency-wide aims and interests, and carefully designed means of achieving them, for a particular purpose.

Tactical – Carefully tailored actions for use in immediate support of policing operations given the known facts and conditions relevant to an event; thoughtful responses and purposeful small-scale actions with an immediate end in view.

Theory of Risky Places -- Proposes that risk levels of crime can be computed at places according to the symbiotic effects of three sets of factors: spatial vulnerability, global exposure; and local exposure; Looks at patterns, rhythms, and tempos of criminal behavior within a vulnerability-exposure framework that computes the relationship between context, process, and threat.

Translational Criminology – The process of taking research and putting it into practice.

Vulnerability (Spatial) – The context of environmental risk; A place’s vulnerability is operationalized by the spatial influences of nearby features. 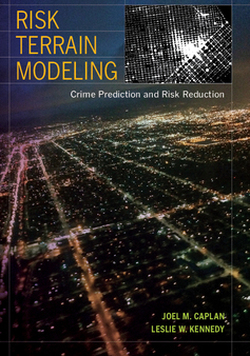 Learn all about these glossary terms, and how they fit together, in the forthcoming book:
Risk Terrain Modeling: Crime Prediction and Risk Reduction
by Caplan & Kennedy
University of California Press, Summer 2016